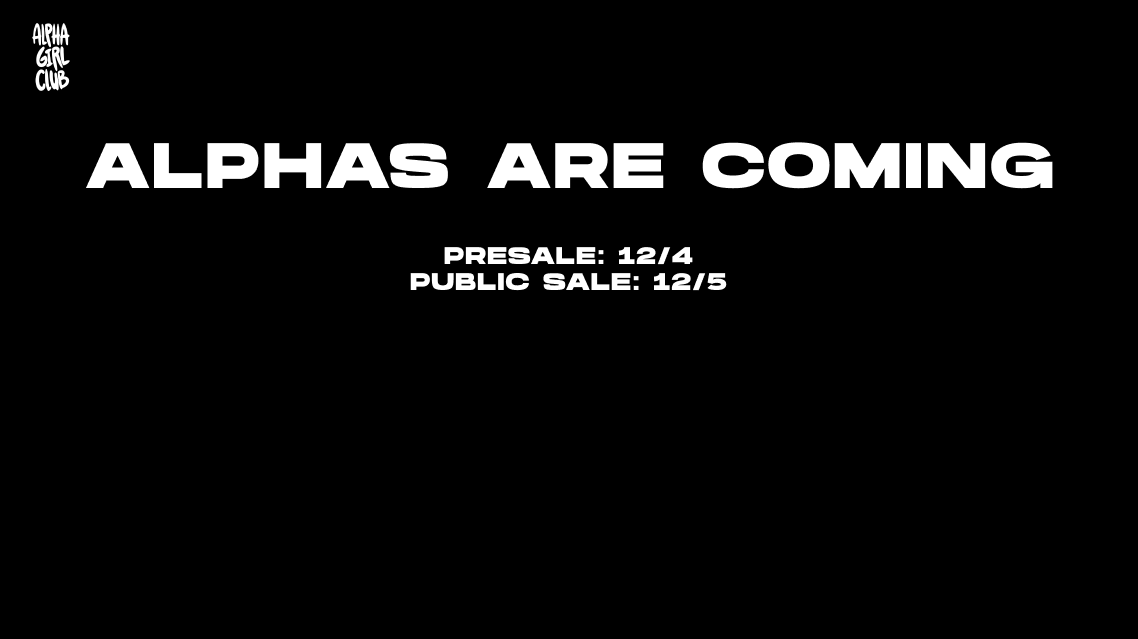 Alpha Girl Club is empowering individuals to use their inner strength for good all around the world. To be an Alpha means to face your most daring demons and fears, show kindness and respect towards others altogether, Alpha or not, and to stand up for others when they cannot stand up for themselves. Alongside the uniqueness of the art, they are fighting for self-empowerment and mental health, and believe it is time for the NFT community to join hands with real-world communities, to fight for these social changes together.

There is no question that the art by Irwin is eye-catching, but what differentiates and keeps their community coming back and growing at Alpha Girl Club is their team. Working side by side with founder and artist Charles Koh & John Irwin, are software developer, Rashid Osman, and community builder, Micheal Sullivan. With Osman as their Developer and Sullivan as Community Manager, Alpha Girl Club has also brought on ex-NBA Kayle John as Marketing Manager. Together, this team has done nothing but really fine-tune the tone of their community and members by starting off with an invite-only Discord channel. They all have taken their time to genuinely get to know their members and vice versa. Additionally to the main team, they’ve brought on Discord moderators who were originally part of their early support group, and have also built out a huge marketing program called Alpha Guardians, which is joined by Miss Universe 2015, Mental Health Advocate, and co-host of Spotify Original, Between Us Queens, Pia Wurtzbach.

Alpha Girl Club have launched their official website and released their very exciting roadmap; An online store, virtual experiences, IRL experiences, a mental health mobile app, as well as investing opportunities. Included with their IRL experiences, they have already set in stone their biggest giveaway to date; a trip to Tokyo, Japan. With expenses taken care of, the winner will be traveling to Japan to not only learn about the Japanese culture that inspired Irwin’s art but will also complete “Alpha Missions” by volunteering and giving back to the community.

Alpha Girl Club has also landed and partnered up with Suzy Ryoo, Co-Founder & President of Venice Music; a music tech startup on a mission to empower the independent future of the music industry. Venice has worked with the likes of Aminé, Thuy, emlyn, Esty, Sophia Alexa, Erick the Architect (of Flatbush Zombies), Vaultboy, and Riot Games (behind the hit League of Legends series, Arcane) to distribute and service their music around the world. Venice is committed to working with Alpha Girl Club to shine a light on creatives who are paving their own path and building a more equitable future.

Positioned to sell out all 10,000 NFTs, Alpha Girl Club is nearing its launch date, December 4th. With only less than a week to go, their floor is set to be 0.08 ETH for both presale on December 4th, and public sale continuing on December 5th. Their development team has moved to incorporate cutting-edge whitelisting systems to avoid ‘gas wars’. One method of whitelisting was being gifted a whitelist by a member already whitelisted through a fully automated bot system. This helped spur organic growth and ensured everyone to bring a friend in and follow along with the project’s journey. With their early days of the first clubhouse-like invite-only concept for their Discord server, the team has been able to really fine-tune the community. Also instead of whitelisting and minting being done on-chain, to reduce gas, they’ve moved the minting process to be managed by an off-chain server to ease the load on the contracts.

From the mesmerizing art to the genuineness of the team, if you’re not following Alpha Girl Club already, join them now as they are approaching their launch on December 4, 2021.

Join the movement, and get connected.