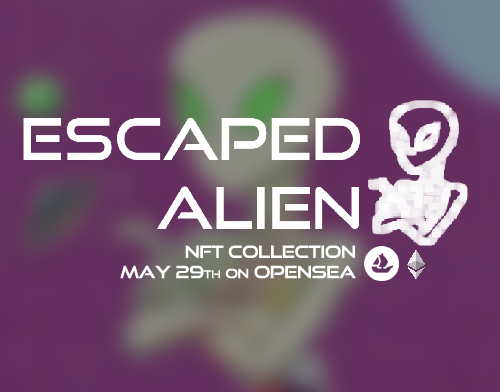 NFT Drop Details:
“Escaped Alien” revolves around an extraterrestrial race named “The Exins”. Humans discovered them and held them captive at a research facility in outer space to conduct an extensive examination on them. The research facility was named Area 99 and a small research team was responsible for conducting the experiments. But something happened, something the humans were not prepared for: The Area 99 team felt guilt. They felt remorse. They soon realized the whole operation was morally questionable. Conducting experiments on living creatures who have done nothing against the human race? It did not feel right, so the research team decided to create a plan together to let the Exins free.
The Escaped Alien is a collection of 250 alien-NFT’s. Each one of them is individual on its own. Each Exin has its own personality traits which are expressed through the way they present themselves. You will notice immediately that some Exins are very creative when it comes to creating an outfit. Accompany the Exins on their journey to find a new home!