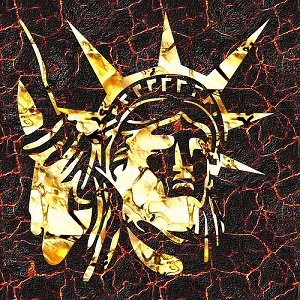 Statue of Liberty: Liberty Enlightening the World
The artwork represents the face of the Statue of Liberty. The face is created with golden metallic effects, giving it the appearance of a melted gold structure. The background texture is a broken black rock with lava erupting from its base.

The artwork is designed in such a way that it appears as if the golden face of liberty has appeared on the earth’s surface while floating in lava.

The Statue of Liberty is a sculpture located on Liberty Island in New York Harbor in, USA. Libertas, a robed Roman liberty goddess, is represented in the statue. With her right hand, she holds a torch above her head.

The statue became a symbol of freedom and of the United States, serving as a welcome sign for immigrants arriving by sea.