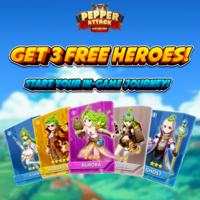 NFT Drop URL
https://pepperattack.com/free-mint
NFT Drop Details:
Aurora Rising! For the first time, Pepper Attack is releasing a non-random mint Hero NFT… Aurora! Aurora brings special skills and utility to your team, useful for both PvE and PvP. With only 400 available, and minting at a low cost of 0.015, Aurora won’t be “rising” for long! You may want to grab a few.

What Makes Us Different: Pepper Attack is a “Play to Own” NFT-based strategy game on the Polygon Blockchain. With a unique PvEvP leaderboard system, players play for free, play for fun, play for fortune!

Pepper Attack is in open beta, but the new game fully launches one week after the Genesis NFT launch, on September 12th.