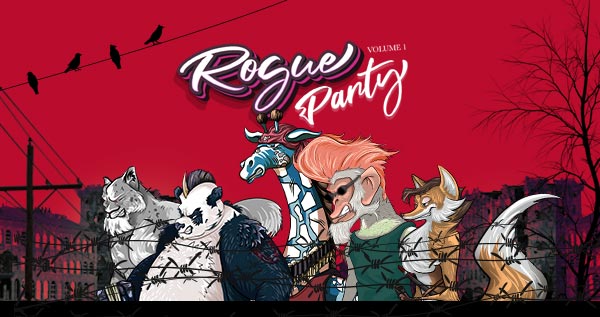 Message Body:
Rogue Party is a hybrid NFT + Game experience*. it is based on the future true story of the animal recruits in a search mission for humans after being thrown out of the planet by the machines.

Storyline:
The Story begins in the Crypt-Era when Mankind was enslaved by human-built Machines with advanced AI that controlled the world and different planets. The Human Resistance which was left behind was trying to hold back machines and from being enslaved to their own Creation.

The future of Mankind had no Saviour, during this apocalypse, there emerged the only Hope, ROGUE PARTY, Triumph Characters with genetically modified traits that had no match. Human Resistance recruited ROGUE PARTY to fight their battle and pursue their dream of freedom and a better future.

Human Resistance recruited Rogue champions one by one, RED NECK being a hardcore battle Veteran volunteered himself for the cause. As for Angry Wang, his hatred for machines and love for bamboo drew him to take sides with Humans and fight against ruthless machines. The beauty Luna also volunteered against machines and was hired in Rogue Party for her brilliant tactics and mind games, her planning was the key to success. Humans helped Mountain ghost escape and signed him up for his endurance and strength, his egoistic power came from the torture he endured during his time in Machine Captivity. Lastly, Taicho, lightning-fast monster was famous in machines due to his devious and swift attack nature, this made him one of the most deadly warrior against machines.