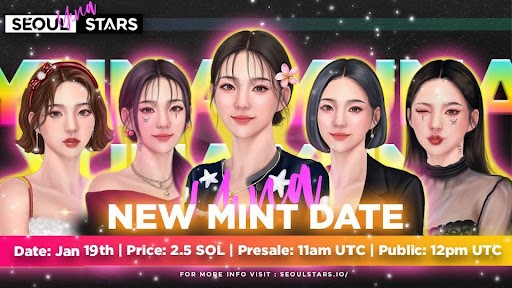 Seoul Stars will have a collection of 10,000 limited edition and unique NFT illustrations by famous Korean artist SONGBLY84

These limited edition NFTs represent Yuna – the first and foremost virtual Kpop artist. Yuna will have her own songs, webtoon comics and even host concerts in the metaverse. That’s not all though, Yuna will also have her own blockchain game where fans will be rewarded in $STARR tokens for playing

To ensure fans receive the most authentic and high quality Kpop content from Yuna, Seoul Stars has partnered with top Kpop agency HUMAP, and producer Tommy Lee. As well as this, Catheon Gaming – the creators of SolChicks will be working with us to create a top tier game

Seoul Stars first wave of 2500 all sold out, don’t be late to our second wave mint!.

Lots of benefits and exciting content for holders. Don’t miss out!