The Coin of Gotham City 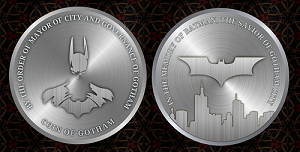 The Coin of Gotham, also known as The Coin of Honor, is a currency authorized by Gotham City’s governance in honor of The Dark Knight, Batman.
When Batman martyred in order to save the city from Bane and the League of Assassins’ nuclear attack, Jim Gordon, the city commissioner, proposed honoring the Guardian Angel of Gotham.
So, in the memory of Batman aka Bruce Wayne, the Mayor and other senior officials of Gotham City approved this coin as a symbol of unforgotten gratitude.

The coin art was developed with the help of ten illustration elements and many vector sub-elements.
These illustration files are then compressed into high-resolution PNG format pictures, which are subsequently shown as Gold and Silver coins art.
The GIF file’s background is pixel art portraying Gotham City and the Batman symbol in the sky.

Front Side – The image of Batman is depicted on the coin’s head side. It also has a written message, “BY THE ORDER OF MAYOR OF CITY AND GOVERNANCE OF GOTHAM” on the top, and “THE COIN OF GOTHAM” at the bottom.

Back Side – The tail side of the coin showcases the image of Gotham City, and the symbol of Batman appearing in the sky. It also has a written message, “IN THE MEMORY OF BATMAN, THE SAVIOR OF GOTHAM CITY”.