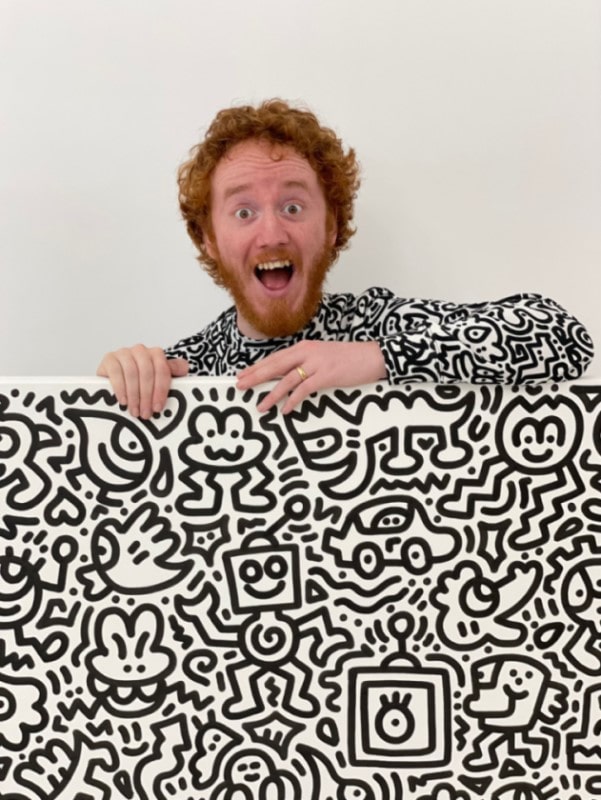 Artist Mr Doodle Brings Out His Most Mischievous Characters in NFT Artwork, The Living Doodle, Auctioning on SuperRare September 27th. The lucky buyer will receive the original canvas artwork in the artist’s most anticipated NFT single edition release where DoodleWorld characters attempt their escape into the digital realm.

September 24, 2021, New York, NY – Mr Doodle in partnership with Pearl Lam Galleries and SuperRare announces the debut of a new Non-Fungible Token (NFT) artwork on September 27, 2021 which showcases the true essence of his artform ‘Graffiti Spaghetti’ available exclusively via SuperRare. Movement and sound bring a new dimension to his latest artwork, The Living Doodle, allowing viewers to fully immerse in and experience DoodleWorld in a way they never have before.
The scene begins calmly with just a few simple characters being drawn to life, and like a stretch of dominoes being knocked, the action kicks off and characters begin to interact with each other in a fun way. The artist is particularly excited about this piece since it combines his traditional time-lapse format of doodles on canvas with animation. While he has created similar projects before, the combination of layering and stop motion animation provides a reimagination of his art and of its characters – which were based on creatures and facial features that the artist found suitable for its mischievous nature.
“Most of the characters are cheekily trying to escape their chosen spots and are interacting with others in a funny way. Some of my favourites are the alien and the long-necked creature on the computer in the bottom right of the piece,” says Mr Doodle. “The characters are behaving mischievously because my style of work is called ‘Graffiti Spaghetti’ and naturally graffiti artists are generally up to trouble therefore so are my characters!”.
After splashing onto the art scene seven years ago, Mr Doodle achieved mainstream appeal by collaborating with popular brands like Fendi, Puma, Samsung and MTV. He continues to impress with his large-scale complex designs in art installations, murals, and street art.

“Mr Doodle is an artist with an amazing story on how he used to give out doodles on the street before becoming a star. I’ve long admired him and we are excited to showcase his next evolution into the NFT SPACE where he combines sound and animation to bring life to his doodles on a scale he’s never done before,” states SuperRare Senior Vice President, Art Advisory Zack Yanger.
Mr Doodle is excited to give away the original canvas artwork to the winning bidder. The Living Doodle NFT will be auctioned as a single edition available for bidding on September 27 starting at: Los Angeles 8AM / New York 11AM / London 4PM / Beijing 11PM. For more information, please visit SuperRare.com.
To participate in the auction, register an account on SuperRare.com, then connect it to your preferred crypto wallet. All transactions on SuperRare are denominated in ETH.

ABOUT MR DOODLE
A millennial artist, Sam Cox, the artist behind Mr Doodle creates work that provokes discourse on what we consider fine art today. Mr Doodle’s works transcend beyond the canvas, invading furniture, books, clothing and more. He has collaborated with iconic brands, including Fendi, Puma, Samsung and MTV. Welcomed by millions of followers on social media, Mr Doodle’s artistic process is fluid, mesmerizing, therapeutic and made without hesitation.

ABOUT PEARL LAM GALLERIES
Pearl Lam Galleries is a driving force within Asia’s contemporary art scene. Founded in 2005, the gallery plays a vital role in stimulating international dialogue and cross-cultural exchange between the East and West. Pearl Lam Galleries is the exclusive global representative for Mr Doodle.
www.pearllam.com

ABOUT SUPERRARE
Founded in 2018, SuperRare is a pioneering, curated marketplace for high quality NFT artworks, built on the Ethereum blockchain. More than $100M worth of NFT-based artworks, also known as ‘CryptoArt’, have been bought and sold on the platform, with artists earning revenue on both original sales and resales. In August 2021 SuperRare launched the new $RARE curation token, converting the SuperRare NFT marketplace into a community governed network of galleries, decided on by community vote. Galleries and collectives who are approved by the community have independent storefronts, also known as ‘Spaces’. Each Space on the platform has the tools to buy, sell and curate single edition artworks.
superrare.com